Lately, A lot of my friends have been getting onto Facebook, a social networking website. It’s a site that enables people to share information with, and read information shared by friends. Users are encouraged to update their “status message” to let people know what’s going on in their lives.

I’ve been using the status message (which is pulled automatically from my feed on Twitter, another, more limited social network site) for all manner of messages. In the last month or so, I’ve been writing short summaries of my dreams shortly after waking.

Here's my Facebook status message about a dream, with some responses from friends.

It’s a simple process: when I wake up, even if it’s the middle of the night and I plan to sleep again, I pick up my iPhone and tell Twitter what I was dreaming about. Twitter tells Facebook, and it becomes my status message. Sometimes, I’ll wake up later and I won’t remember what I had been dreaming about. Then I’ll go look at Facebook, and I’ll remember.

I’m not sure why I started doing this. It could be because when I was six, I had a dream about a shoe store with a wooden giraffe whose motorized neck kept moving up and down, and for years I kept insisting that it was a real place in Baltimore, or maybe in Vienna, Austria. It could also be because I began taking a medication that many users say causes hyperrealistic dreams as a possible side effect. (WebMD doesn’t list this as a side effect, however.) I ended up telling people that the meds were why I was logging the dreams, so I wouldn’t get confused about reality.

It’s almost taboo to talk about dreams with friends. You can’t just say to a co-worker, “Hey, you were in my dream last night.” Indeed, when he or she looks at you strangely, there’s no good way to explain yourself, even if you say something like “Oh, no, it’s not like that. You had clothes on.” By then, the co-worker is ready to file a sexual harassment suit, a situation that might or might not be defused with a “No, we had to find this green stone and take it to the school library before 3, but we couldn’t find the bus to take us to school. And then the principal caught us and took the green stone, but it turned blue in his hands…”

There’s no shared experience when you’re retelling a dream in person. It’s often a waste of the other person’s time, unless that person is a dream interpreter. 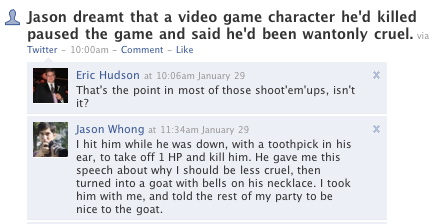 Another random dream. A friend questions me, and I provide more detail. I had totally forgotten about it until I wrote this post.

For some reason, it’s not taboo to write about dreams on Facebook status messages. (At least, if you have a good sense of how to edit yourself, it doesn’t get you in trouble.) I’ll write a short summary, and friends will ask me what I have been smoking, or what I ate before I went to bed, or they’ll just say I’m weird. Many of them say they laughed out loud. A few friends have started to post about their own dreams, though not as frequently.

Maybe it’s art. Maybe it’s not.  Whatever you think about it, it’s my gift to my friends, and many of them are enjoying reading what I have dreamt about.

For Email Marketing you can trust