Today I am in heaven for a moment.  I received a care package, a gift from an old dear friend who knows I could not get the contents anywhere near here.

I guess what it is by the shape of the packege, a squarish rectangle, and the date, the timing… I can’t be sure, could it, could it be that time of year again? She has wrapped the box twice.

The outer layer is an inverted whole foods paper bag, the next layer is a red and white plastic bag that confirms my anticipation. It is from Fung Wong’s Bakery, which makes the best mooncakes in Chinatown.

Tears arise as I type this, but  when unwrapping the package, it was my mouth that watered. My four cakes are lotus seed, wintermelon and black bean, with and without the golden orbs of egg yokes in their centers. The Moon Festival began on 9/14 , my friend writes.

The Mid-Autumn Festival, also called the Moon Festival, has been celebrated for centuries. Traditionally, on the fifteenth day of the eighth lunar month in observance of the bountiful autumn harvest, Chinese families gather for a day to relax and eat moon cakes.

The plastic shopping bag is handsome, red and white with gold. The box is beautiful, red with yellow and gold which shines and in the center a dragon and phoenix with clouds… In short, it is a treat for the eyes, and I am feasting before I’ve opened the box.

The four cakes are embossed, rounded-edge squares and a circle, Each cake has a character embossed/enscribed on its gold-brown top. By chance, the one I choose to slice a bit from first, is my favorite, black bean. The taste is not like beans at all, nor sugary, but dense sweet foodiness, a desert food; the hearty aspect of delicacy, a filling treat.

There is no Moon Festival in Corning for me to attend, but the art on the plastic shopping bag and the art on the box are transporting. I think of my other home with gratitude, how this delicious pastry and my friend taught and brought me another tradition, mythology and inspiration.

I’ve written poems about mooncakes. In one legend they were used to smuggle messages in time of war.  Mooncakes – which the Mongols did not eat – were the perfect vehicle for hiding and passing along plans for the Chinese rebellion in the 14th century.

This pastry led me to create, taught me about others, and its packaging provides me with iconic art and design.

These mooncakes are my sign of hope, continuance and tasty joy. 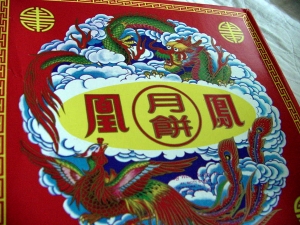 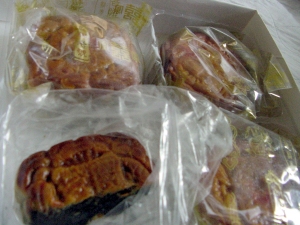 Sliced Black Bean Mooncake and others

For Email Marketing you can trust